Last week I had the privilege of visiting Cindy Gallagher’s third grade class at St. Celestine School in Elmwood Park, IL. Jeanine Rocchi, the building principal, met me in her office and told me how pleased she was with Cindy’s move to a flipped classroom.  I was then escorted to the room and walked into a place of active learning and engagement.  Her students greeted me and even made a poster for me.

The lesson I observed was a math lesson on finding volume.  The previous night the students had watched a 3 min video on how to find volume.  You can watch it here:  Then in class, Cindy spent a few minutes checking for understanding regarding volume and then gave them three tasks:

Each student jumped in and started working on their tasks.  Since they already had background information they  were ready to get messy with their learning.  As I circulated in the room, I took some time to talk to many of the students.  I asked if they had watched the video and all of them said they had.  One boy told me that the topic was a bit “tricky” for him and he had to watch it twice.  I loved how this young man knows when he needs to hear something twice.

Another young man was not doing the tasks in the order that Mrs. Gallagher had presented and I asked him why. He told me he really like the Socrative quiz best so he wanted to save it for last.  He was taking more ownership of his learning.  He liked that he had some choice over the order in which he accomplished tasks. 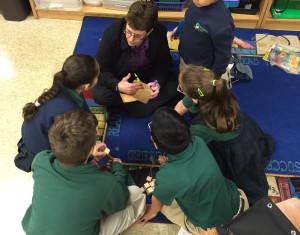 Afterward, I chatted with Cindy and asked about her thoughts on the lesson and on flipped learning in particular.  She told me, “I could never go back.”  And, since she was only flipping math, she wanted to expand it more for next year.  So next year she is going to start flipping some grammar and vocabulary. She said she loves that her kids are getting so much more individual attention. 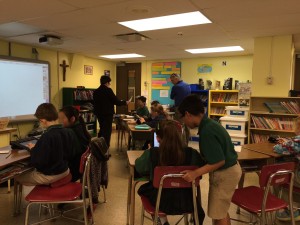 What strikes me about Cindy’s class, is how the simplicity of flipped class method has such deep implications for learning. Her class has been transformed and allows for greater differentiation, more engagement, and better student outcomes.

Jon Bergmann is one of the pioneers of the Flipped Classroom Movement. He is leading the worldwide adoption of flipped learning through the Flipped Learning Global Initiative (FLGI) flglobal.org. He is working with governments, schools, corporations, and education non-profits. Jon has coordinated and guided flipped learning projects around the globe. Locations include: China, Taiwan, Korea, Australia, the Middle East, Iceland, Sweden, Norway, the United Kingdom, Italy, Spain, Mexico, Canada, South America, and the United States. Jon is the author of nine books including the bestselling book: Flip Your Classroom which has been translated into 13 languages. He is the founder of the global FlipCon conferences which are dynamic engaging events which inspire educators to transform their practice through flipped learning. He spent 24 years as a middle and high school science teacher before becoming the lead technology facilitator for a school district in the Chicago suburbs. Jon is a master storyteller, captivating audiences around the globe. He has a knack for taking complex things and simplifying them through story and humor. Jon hosts a radio show, The Flip Side, He also has a popular YouTube Channel with over three million views. In 2002, Jon received the Presidential Award for Excellence for Math and Science Teaching; and in 2010, he was named Semi-Finalist for Colorado Teacher of the Year. He serves on the advisory board for TED-Education. In 2013, was named one of Tech & Learning's 10 Most Influential People of the Year, and was also a finalist for the Brock International Prize for Education and winner for the 2013 Bammy Award presented by the Academy of Education Arts and Sciences.