I am a lecturer of Latin Linguistics, Literature, and Pedagogy at the Faculty of Teacher Education at the Unversity Colleges Leuven-Limburg in Belgium (since 2015). I obtained my master’s degree in Latin and Greek Linguistics and Literature at the KU Leuven (M.A., 2009) and did PhD-research on Latin Linguistics at the Free University of Amsterdam (2010-2015). In my spare time, I collaborate on a series of high school textbooks for Latin (Ars Legendi, Plantyn Publishers). For me, working together with other teachers is a very enriching experience.

My professional interests include Latin Linguistics and Narratology, philosophy of education, inductive active learning environments and of course flipped learning. My way of thinking about education is deeply inspired by the mantra of the late Steve Jobs: Focus and Simplicity. Both values are deeply embedded in the designing process of my flipped classes and I strongly believe that they are very important for teachers too.

As a teacher at a teacher college, I adopted Flipped Learning because I find active learning very important, especially since my students will be teachers in the future. Therefore, it is crucial that they have experienced what active learning means and how flipped learning enables them to do this. In my classes, I also focus on self-directed learning, an important skill teachers should be trained to facilitate. 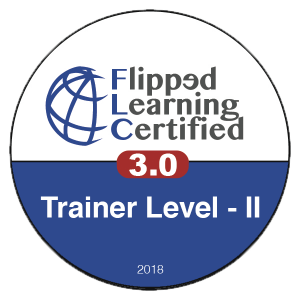 Jon Bergmann is one of the pioneers of the Flipped Classroom Movement. He is leading the worldwide adoption of flipped learning through the Flipped Learning Global Initiative (FLGI) flglobal.org. He is working with governments, schools, corporations, and education non-profits. Jon has coordinated and guided flipped learning projects around the globe. Locations include: China, Taiwan, Korea, Australia, the Middle East, Iceland, Sweden, Norway, the United Kingdom, Italy, Spain, Mexico, Canada, South America, and the United States. Jon is the author of nine books including the bestselling book: Flip Your Classroom which has been translated into 13 languages. He is the founder of the global FlipCon conferences which are dynamic engaging events which inspire educators to transform their practice through flipped learning. He spent 24 years as a middle and high school science teacher before becoming the lead technology facilitator for a school district in the Chicago suburbs. Jon is a master storyteller, captivating audiences around the globe. He has a knack for taking complex things and simplifying them through story and humor. Jon hosts a radio show, The Flip Side, He also has a popular YouTube Channel with over three million views. In 2002, Jon received the Presidential Award for Excellence for Math and Science Teaching; and in 2010, he was named Semi-Finalist for Colorado Teacher of the Year. He serves on the advisory board for TED-Education. In 2013, was named one of Tech & Learning's 10 Most Influential People of the Year, and was also a finalist for the Brock International Prize for Education and winner for the 2013 Bammy Award presented by the Academy of Education Arts and Sciences.